Staff who work around the clock to ensure the success of the Shropdoc out-of-hours service have been honoured for their efforts. A Shropdoc Celebrating Success event was held at the Shrewsbury Town Football Club on September 28, 2015, where a number of staff were recognised.

The winners were chosen by a judging panel consisting of a Shropdoc Council board member, a senior clinician, a member of the executive team and four members of staff. Among the winners was Lorraine Purcell who while working for the Shropshire Community Nurse team successfully gained her BSc in nursing and “works tirelessly to meet the needs of her patients, often working beyond the limits of her shift”. She received the Clinical Services Award.

Also honoured was Ellie Beddin, Help2Change co-ordinator, who “works tirelessly” to develop the administration and operational processes in Help2Quit, Help2Slim and Heath Checks in Shropshire.

The Chief executive of Shropdoc, Ian Winstanley, said Ellie was nominated by colleagues who said she worked with very little supervision on the project and has built up excellent working relationships with both practices and Shropshire Council Help2Change staff.

“Ellie received the Leadership Award for her hard work, and for going above and beyond the call of duty – which many of our staff often do here at Shropdoc. The Newcomer of the Year Award was given to Felicity Morgan, who was described as a ‘true asset’ and the Non Clinical Services Award went to Julie Winwood, a dedicated member of Telford staff, always willing to step in for additional shifts and using excellent interpersonal skills to make patients feel at ease.”

The Telford team – the busiest Shropdoc base – was honoured as a whole with the Team of the Year Award.

And the final award was given to two joint winners as the judges could not decide between the two.

“The Unsung Hero Award went to Christy Robinson and Sebastian Littlefair-Vernon. Christy works in Shrewsbury as a bank driver and call handler and is a reliable, happy person who always puts the patients at ease,” added Mr Winstanley.

“Seb is always willing and eager to take on new roles and responsibilities and his colleagues said he never expects any thanks or any help – he takes on many tasks that some people would deem unimportant but, without Seb doing them, the office would grind to a halt.”

Dr Russell Muirhead, chair of the Shropdoc board, chose the recipient of the overall Chairman’s Award, which was presented to Christy Robinson.

“Christy is someone who we can really rely on here at Shropdoc and she is always willing to help out at short notice and has covered many shifts at the last minute. Congratulations Christy, the award is well deserved.”

The Celebrating Success Day, which also raised money for the Alzheimer’s Society, was the first of its kind for Shropdoc and also included the presentation of long service awards and an overview of patient experience and round-up of what Shropdoc has achieved as a service in the last 12 months. 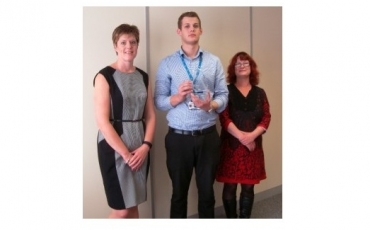