Major Tracey Brown, from Shrewsbury, The Army Reserve medic, will complete a three-month tour of duty at the Camp Bastion military hospital.

Major Brown,is part of a 34-strong team travelling to the country to work in the emergency department at the hospital in Helmand Province before coalition forces leave.

The 41-year-old, also a nurse practitioner, spent four years working in the accident and emergency department of the Royal Shrewsbury Hospital before joining Shropdoc, the out-of- hours GP service 12 months ago. Major Brown, who joined the TA several years ago, is relishing the challenge of working at 202 Field Hospital with doctors and nurses from hospitals in Shropshire and Staffordshire. She was deployed to Iraq in 2004 but it will be her first time in Afghanistan. She said: “We have a really cracking emergency department team. “You do not think of yourself when you are treating wounded troops, you just want to give the best possible care you can. That is your duty.”

Major Brown will be joined by Corporal Emma Thomas, 25, from Baschurch, who is a staff nurse in the coronary care unit at the RSH and Major Jane Phillips, who lives in Worfield near Bridgnorth. The hospital team will include consultant radiologists, physicians and anaesthetists, paramedics, nurses and theatre assistants.

The deployment has been planned for three years and the medics have been under intensive training for the past 12 months. They will treat injured UK and coalition forces and train Afghans to care for their troops and police at a hospital being developed at the nearby Camp Shorobak.

Negotiations continue over the future of the hospital at Camp Bastion when British combat troops leave this year. 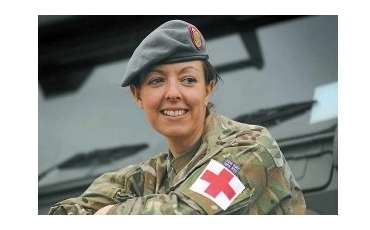