The Urgent Care Centre at Leighton Hospital, Crewe, has been presented with the Dr Steve Hugh Award in recognition of its work delivering extended primary care in partnership with the accident and emergency department. It has also been recognised for the ‘innovative clinical pathways’ that have helped enhance patient care at the point it is most needed.

The Urgent Care Centre is the eighth recipient of the award, which was set up in memory of Dr Steve Hugh, who was Shropdoc’s highly respected medical director for many years.

“Dr Hugh’s ethos of clinical excellence made it a fitting tribute to his memory to institute an award in his name. ShropDoc is proud to announce that the 2013 winner of the Dr Steve Hugh Award for Quality in Primary Care is the Urgent Care Centre at Leighton Hospital, Crewe. The service it provides alongside the accident and emergency department is vital for both patients and the hospital itself, treating those who might otherwise have had to make their way to A&E. Its service has greatly enhanced patient care and is thoroughly deserving of our award.”

The UCC team deliver a community DVT service and several other pathways which allow patients to be treated at home rather than be admitted into hospital. They also support A&E by accepting many patients who are better treated by a GP, enabling A&E staff to concentrate on the more acutely ill or injured patients.

The Steve Hugh Award is open to any health professional or service, who or which can be nominated by a colleague as an example of someone providing or developing a service that goes beyond normal expectations to the benefit of patients. The award is made annually and there is a donation of £1000 for the benefit of a Charity or local project of the winner’s choosing. 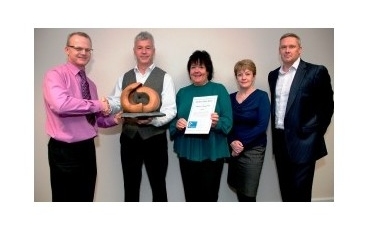